A patent is a grant of a property right to a patentee, his heirs or assigns, over an invention issued by the patent office in the country where the individual seeks to obtain such protection.  In the United States, a patent is applied for and granted to the applicant by the United States Patent and Trademark Office (USPTO), which gives the patent holder a right to exclude others from making, using, importing, offering for sale, or selling the invention throughout the United States.  Further, a patent holder maintains a property right to the patent for a limited time of up to twenty (20) years.  35 U.S. Code § 154.

The first patent statute was passed in 1474 in the Republic of Venice; the second was enacted by Great Britain in 1624, "the Statute of Monopolies;" which then led to America's Constitutional right to a patent, as enumerated under Art. 8, Section 8, Clause 8: "To promote the Progress of Science and useful Arts, by securing for limited Times to Authors and Inventors the exclusive Right to their respective Writings and Discoveries;" and in 1790, Congress passed the Patent Act.  Princeton Law; Cornell Law.

There are three common types of patents:

Utility Patent.  A utility patent is issued for an invention that is used in a process, machine, article of manufacture, or composition of matter, or any new and useful improvement thereof.  Utility patents are the most common types of patents in the United States; they are subject to maintenance fees; and maintain protection for up to twenty (20) years.

Design Patent.  A design patent is issued for a new, original, and ornamental design that is either embodied or applied to a manufactured product.  Design patents are not subject to maintenance fees, and are protected for up to fourteen (14) years.

Plant Patent.  A plant patent is issued for a new and distinct, invented or discovered asexually reproduced plant, which includes cultivated sports, mutants, hybrids, and newly found seedlings, other than a tuber propagated plant or a plant found in an uncultivated state.  Plant patents are not subject to maintenance fees, and are protected protected for up to twenty (20) years.

A patent is filed with the United States Trademark and Patent Office (USPTO), which is in charge of reviewing and granting patents for the protection of inventions. Throughout the reviewing process, the USPTO maintains complete confidentiality over the inventor's product and/or method claims until the invention is granted a patent, whereby it will then publish and disseminate the patent information as public record.  The goal of the USPTO is to preserve the United States' competitive edge by promoting a monopoly over patented inventions for up to 20 years.  USPTO.

To file a patent, there are more than one type of patent applications:

(2) Non-Provisional Patent Application:  A nonprovisional patent application is the "standard" type of application that consists of the invention's description, contains official forms, and other related materials as required by the USPTO.  USPTO

(3) Non-Provisional Accelerated Examination: Under an accelerated examination program, an applicant may petition to the USPTO to make special, including, but not limited to, manufacture, infringement, environmental quality, energy, recombinant DNA, superconductivity materials, HIV/AIDS and cancer, countering terrorism, and biotechnology applications filed by small entities (MPEP § 708.02). USPTO.

Do not, under any circumstances, rely on information found on our website as legal advice. Legal matters are often complicated. The law changes frequently and varies from jurisdiction to jurisdiction. Being general in nature, the information and materials provided may not apply to any specific factual and/or legal set of circumstances. For assistance with your specific legal problem or inquiry please contact a knowledgeable lawyer, who practices in your area of need and would be pleased to determine whether she or he can assist you. The State Bar Association is ordinarily a good source for referrals for competent attorneys. 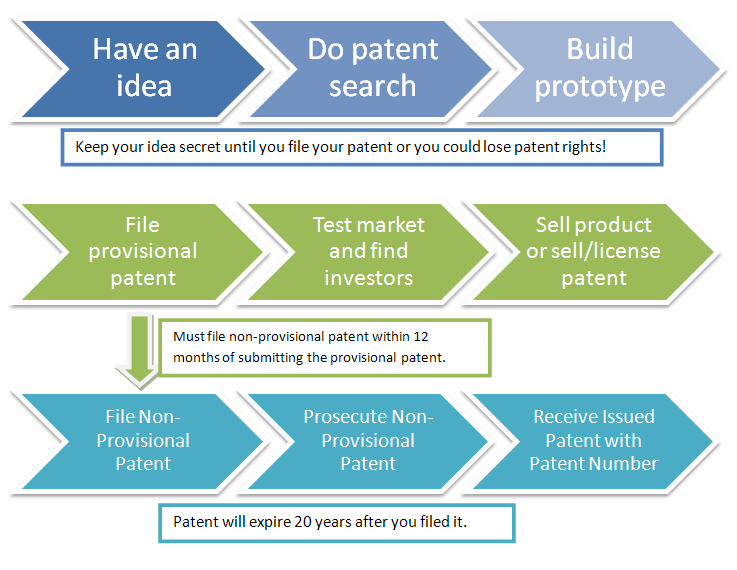 Patents are territorially limited to the country where the patent was granted. However, under the World Intellectual Property Organization (WIPO), a patent holder may seek foreign patent protection by filing in several different countries through either the Paris Convention or the Patent Cooperation Treaty. WIPO.

First, in order to obtain a patent, the invention must be novel, whereby such person would entitled to a patent, unless,

Secondly, the invention must reflect a "new and useful process, machine, manufacture, or composition of matter, or any new and useful improvement thereof" in order to obtain a patent.  35 U.S. Code § 101.