Professor Scarnecchia brings to the School of Law experience as a faculty member, an attorney in private practice, and as an assistant county prosecutor. A member of the Franciscan University of Steubenville faculty since 1996, he has chaired Franciscan’s Department of Humanities and Catholic Social Thought, and has directed the University’s Human Life Studies and Legal Studies programs. Professor Scarnecchia lectures on human rights, natural law, bioethics, and cultural and political issues both nationally and internationally.

Legal Aid
Filed a successful federal 1983 class action Civil Rights in Federal District Court, Northern District of Ohio, 1990-1991against the City of Youngstown for cruel and unusual punishment which resulted in the closing of the City Jail of Youngstown, Ohio, and punitive damages for the mistreatment of pro-life rescuers, students from Franciscan University of Steubenville serving as the class representatives.

Lecture
Provided a lecture on “The Defense of False Charges of Child Abuse” at a continuing legal education seminar approved by the the Supreme Court of Ohio held at Franciscan University of Steubenville, April, 1995.

Philippines
Lectured with Human Life International for three weeks at universities in Manila and other localities in the Philippines, October 1995.

Philippines
Lectured for two weeks in the Philippines and presented a paper at the School of Law, Santo Tomas, in Manila and at Symposium on Faith and Culture sponsored by the Asian Bishops Conference and the Pontifical Council on Culture “The Tension between Law and Culture,” January, 1996. These papers were subsequently published.

Lecture
Lectured at the Defending the Faith conference at Franciscan University of Steubenville, “Defending the Gospel of Life,” July, 1999.

Lecture
Lectured at the fall conference of the Society of Catholic Social Scientists on the “Population Crisis,” Franciscan University of Steubenville, October, 1999.

Bioethics
Taught a graduate bioethics course for Franciscan University of Steubenville at Our Lady of the Cenacle campus in Clearwater, FL, August, 2000.

New Program
Designed curriculum and was the founding Director of the Legal Studies program at Franciscan University of Steubenville, fall semester, 2002.

UN
Participated as the main NGO representative of the Society of Catholic Social Scientists at UN 3rd Session of the Convention on Rights of Persons with Disabilities, 5/ 24 - 6/ 3, 2004.

Prosecutor
Provide free legal representation to Children’s Service Board of Jefferson County, OH to off-set the budget deficit, May, 3 - September 1, 2004.

Austria
Lecture on “Human Rights at the UN” at the Gaming campus of the Franciscan University of Steubenville, November 9, 2004.

NGO
Founding president and Chairman of the Board of International Solidarity and Human Rights Institute, Inc. (ISHRI) a non-governmental organization (see www.ishri.net), January, 2005.

UN
Brought faculty and students as NGO representative for the Society of Catholic Social Scientists to the UN conference on Population and Development, April, 2-8, 2005.

UN
Led student NGO representatives to UN 7th Session of the Convention on the Rights of Disabled Persons January, 22-27, 2006.

Mexico   Led students to Washington, DC and then to Tijuana, Mexico (ISHRI’s Capital to Village program) to consider policy and implementation of Immigration reform and efforts to combat Trafficking as well as building a home for a poor Mexican family, July 2-15, 2006.

Civil Rights
Defended the famous Amish “beard cutters” (before they were prosecuted under the federal hate crimes act for cutting the beards of fellow Amish men in 2011) in their domestic relations dispute and federal lawsuit against the Sheriff of Jefferson County, Ohio for kidnapping an Amish woman and then, after she escaped, surrounding her one-room Amish school house with a SWAT team deployed with fully automatic machine guns and battering ram while 22 Amish children ages 6-13 were inside, May 2007-2011.

Symposium
Sponsor and MC at symposium on “The Lost Children of China” - a report on a hospice for dying orphans in Beijing and China’s One Child Policy, October 17, 2007.

Rome
Invited to Rome, Italy to attend the founding meeting of NGOs of Catholic Inspiration, November 28 -December 2, 2007 hosted by the Secretariat of the Holy See. I was one (the first) of ten NGOs out of eight-five NGOs who personally greeted Pope Benedict XVI in the Celestine Hall of the Papal apartment.

Rome
Invited to Rome, Italy to attend a conference by the Pontifical Council for the Laity on the encyclical On the Dignity of Women, February 7-9, 2008 and was invited to a private audience with Pope Benedict XVI in the Celestine Hall of the Papal apartment.

Conference
Participated in closed meeting by Heritage Foundation on International Affairs on issue of “Defamation of Religion” Washington, DC, May 16, 2008.

Philippines
Lead human rights trip to the Philippines, July 21-27, 2008: Meet President Gloria Arroyo hand delivered to her a letter from the SCSS urging her to veto a bill that would have legalized contraception, 7/25; Lecture at the University of Asia and Pacific on the role of Catholic NGOs, 7/25; Lecture to international leadership of Charismatic Renewal in Manila on Theology of the Body.

UN
Led students to the 54th session of the UN Conference on the Status of Women, February 28-March 7, 2009.

Rome
Invited by Cardinal Martino to participate in Rome at a conference on “The Role of Women in Development and Human Rights” by the Pontifical Council for Justice and Peace, March 20-21, 2009.

Holy See
Appointed to the Expert Committee of the Rome Forum for NGOs of Catholic Inspiration, in association with the Secretariat of State of the Holy See. March 27, 2009.

Radio
Invited to speak on “Kresta in the Afternoon” live radio on the United Nations and my recent intervention there at the 53rd session of the Conference on the Status of Women, March 30, 2009.

Radio
Interviewed twice by Al Kresta in the Afternoon for his radio program about my new book, Bioethics, Law and Human Life Issues, August 25 2010.

Lecture
Lectured on my book, Bioethics, Law and Human Life Issues at Ave Maria University and at the Donahue Academy on November 23, 2010.

Respondent
Was a respondent at Ave Maria School of Law “Distinguished Guest Lecture” by Ronald J. Rychlak, Associate Dean of the University of Mississippi, on “The International Criminal Court: An Obstacle to Peace?,” February 1, 2011.

Radio
Interviewed twice by Al Kresta in the Afternoon for his radio program about my new book, Bioethics, Law and Human Life Issues, February 2, 2011.

NYC
Lectured on Pope Benedict’s comments on condom use by male prostitutes at “Theology on Tap” in New York City, Bronx’s chapter, March 1, 2011.

Rome
Moderated a workshop in Rome at a conference sponsored by the Secretariat of State for the Holy See and the Pontifical Council for the Family on “Using Positive Language – a Handbook for NGOs,” June 3, 2011 funded by Ave Maria School of Law.

UN
International Solidarity and Human Rights Organization (ISHRI), after being deferred for two years by the People’s Republic of China, finally received provisional accreditation in January of 2011 and final approval in July 2011 by the United Nations Organization.

UN
Prepared and accredited students form Franciscan University and Ave Maria School of Law to participate in the 55th session of the Conference on the Status of Women, February 27-March4, 2011 and again for the UN Youth Conference, July 22-28, 2011.

Rome
Invited to Chair the working session on positive language of the Rome Forum of the Pontifical Council of the Family, January 29-31, 2012.

UN
Prepared and accredited students to participate in the 56th session of the Conference on the Status of Women, March 6-13, 2012.

Respondent
Responded to the lectures of Rev. Terrence Henry, TOR, President of Franciscan University and Eugene Milhizer, President and Dean of Ave Maria School of Law, on the HHS Contraceptive Mandate, March 30, 2012.

Washington
Responded to presentation by Dr. William Donahue and Atty. Robert Destro at the SCSS Spring Conference at Catholic University of America, April 26-28, 2012.

Madrid
Invited to participate in the academic colloquium of the World Congress of Families in Madrid, Spain, May 25-27, 2012.

Legal Aid
Part of a team of attorney’s willing to defend pro bono the City of  Steubenville in its First Amendment contest over the City’s inclusion of a cross in its logo. Several meetings were held with lawyers and City Council, August, 2012.

Rome
Invited to give two lectures, one on “Human Rights Mechanisms in ASEAN” and another on “Demographic Issues,” in Rome for the Secretariat of State of the Holy See and the Pontifical Council for the Family, Rome, September 14-16, 2012.

Course
Attended two Continuing Legal Education courses sponsored by the Ohio State Bar Association, one on November 30, 2012 and the other on December 19, 2012 on “Oil and Gas Law” in preparation for a new course I designed in legal Studies on Oil and Gas Law for spring semester 2012.

UN
Drafted a student submission for the UN conference on “The World We Want post 2015 development and health goals,” February 19, 2013.

Geneva
Brought student NGOs to the UN headquarters in Geneva and met privately with Archbishop Tomasi, Holy See Permanent Observer to the United Nations in Geneva.

Sydney
Presented lecture on “Human Rights Mechanisms in the Association of Southeast Asian Nations (ASEAN)” at the World Congress of Families in Sydney, Australia, May 17-20, 2013.

Rome
Provided introductory talk on the Freedom of Education at the International Conference on The Rights of the Family and the Challenges of the Contemporary World, jointly hosted by the Holy See Secretary of State, Pontifical Council for the Family and the Union of Catholic Jurists, September 19-21, 2013.

Lecture
Provided a lecture on the Public Trust Doctrine and Global Warming at the Society of Catholic Social Scientists annual conference at Franciscan University of Steubenville, October 26, 2013.

Open Letter
Signatory to an open letter from 130 Catholic scholars to the U.S. Bishops denouncing the “Common Core” State Standards as doing a grave disservice to Catholic education. Washington Post, 11/2/2013.

Consultant
Submitted information to Professor Jane Adolphe pertinent to the web page of the International Center on Law, Life, Faith and Family (ICOLF - Rome) for the section I direct, the Human Rights Protection Systems of the Association of Southeast Asian Nations (ASEAN), January, 2014.

OAS
Submitted ISHRI’s application for accreditation with the Organization of American States (OAS), on March 19, 2014.

Response to a Call for Papers from World Health Organization, Health in the Post-2015 Development Agenda, Measurement of Progress towards the Health Goals: What are the best Indicators and Targets for Health? “Recommendation: Preeclampsia should be included as an Indicator for improving Maternal Health and reducing Child Mortality, Millennium Development Goal 4 and Goal 5” submitted by D. Brian Scarnecchia, on behalf of the Society of Catholic Social Scientists and International Solidarity and Human Rights Institute, December 30, 2012. Published in the documentation section, Vol. 19 The Catholic Social Science Review (2014) pp. 309-318.

Amici Curiae of the Ethics and Religious Liberty Commission of the Southern Baptists Convention and Prof. D. Brian Scarnecchia in Support of Petitioners, On Writ of Certiorari to the Supreme Court of the United States, Association For Molecular Pathology, et al. v Myriad Genetics, Inc., et al. 569 U.S. ____ (June 13, 2013).

Guest commentary (Op Ed) for the Naples Daily News on Pope Benedict’s comment on condom use by male prostitutes entitled “Contracepting Sodomy is Oxymoronic” that appeared in the Sunday edition, November 28, 2010.

The Light to Choose, (an introduction to moral theology based on The Catechism, Veritatis Splendor, and Summa Theologica ) in-house publication FUS, February, 2003. 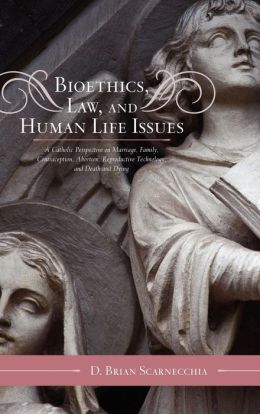